HashLink is a virtual machine for Haxe. It can be used to build native desktop applications as well mobile platforms (Android / iOS) and consoles.

Now that you have installed both Heaps and Visual Studio Code, let's create a new Heaps application.

Differences with the Hello World tutorial

The -lib hlsdl tells Heaps to compile with SDL/OpenGL support. If you are on Windows you can use -lib hldx instead.

At this point, you can open the helloHeaps folder with VSCode by launching VSCode and navigating the main menu File > Open Folder

Create a new Main.hx in a src folder in your project directory and put the following content

This example creates a Heaps Text component, adds it to the 2D scene s2d and set its text.

To be able to compile and debug your application directly from vscode, you need to create a launch task.

If it does not already exist, create a .vscode directory in your project folder and create a new file called launch.json.

Add the following code to the file:

Now, by hitting F5, the project will compile and run. 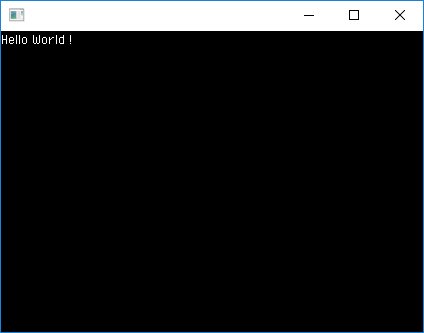 If everything works well, you should now have a hello.hl file created in your project folder.

You can customize the default window size by adding the following to your compile.hxml:

You can put breakpoints into your Heaps application by clicking in the margin to left to the line number in your source code. You can then start again the problem and see it break at the desired position. 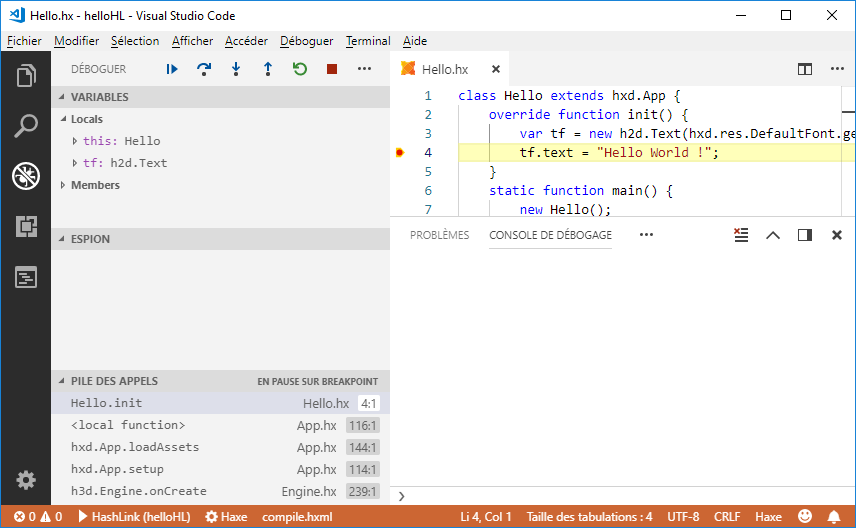 The hello.hl file contains bytecode that can be run with the HashLink virtual machine using hl hello.hl. It does give quite good performances and have been proven by successful commercial games such as Northgard or Dead Cells.

However, it is also possible to compile the HashLink code using a native compiler. This allows to compile for consoles and mobile.

This will create a directory out containing a lot of generated C code that needs to be built using a native compiler and linked to the same HashLink runtime that the HashLink virtual machine is using.

Compiling on mobile and console thus requires some knowledge with each platform compilers and build systems: for iOS, look at this thread for Android, look at this thread * for Consoles (Nintendo Switch, Sony PS4, Microsoft XBoxOne), please contact us at nicolas @ haxe.org if you are a registered developer for one or several of these